Wow, it seems like every time I sat down and tried to add a new post, something else came up. Anyway…it’s Thursday evening, and I am wiped out. This has been a ridiculously busy week and it is not showing any signs of letting up. As part of my job, I take care of getting student artwork to various shows that come up during the year. As I mentioned in my earlier post, 2 students from my school won some major awards at one of the bigger high school art shows on Long Island, and the reception this past Sunday was wonderful (hot and crowded, but great!) Now this week brings 3 more art happenings, a local gallery hosts a show for surrounding high schools, that had to be delivered on Tuesday. Today we actually had work picked up for us…we had participated in a joint project with a local park called the Common Ground, which is short is a reflective garden dedicated to the memory of those who lost their lives on 9/11. This project involved the ceramics teacher whose classes made nature-inspired mosaic stepping stones (24 of them from scratch! not with pre-made tiles), the painting teacher whose classes created famous art scenes (like Starry Night and Christina’s World) on industrial garbage cans, and the technology teacher whose woodworking classes created bird and butterfly houses. So all of these items were picked up from the high school today to be installed in the park. Lastly tomorrow I have to deliver 15 artworks to the American Airpower Museum at Republic Airport, for the Second District Congressional Art Show, hosted by our local Congressman Steve Israel. And of course this weekend brings with it the opening receptions for both of these shows. I will need a vacation very soon. 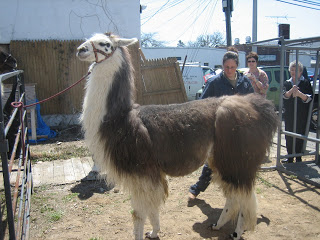 So last Sunday I went to a llama shearing at my LYS. Tabbethia (in the blue behind the llama) taught my spinning class earlier in the year. She owns a farm where she raises and shows (among other animals) llamas. She brought two of her award winners to shear behind the store.
That’s WMF McLellan (Mac).
And this is:

Now I grew up in Brooklyn, and the closest I’ve ever been to a llama was probably in a zoo, but…

here I am with Tabb and Mac! He’s so soft and really friendly (and sort of smelly), but it was so cool to see her shear them. I will post all the pics soon on Flickr. I guess that’s it for now…I will try to post some more over the weekend. It’s supposed to rain so we’ll see.